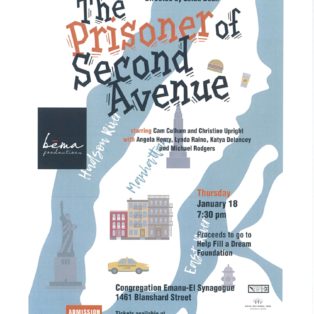 The story revolves around the escalating problems of a middle-aged couple living on Second Avenue on the Upper East Side of Manhattan, New York City. Mel Edison, the main character, has just lost his job after many years and now has to cope with being unemployed at middle age, during an economic recession. The action occurs during an intense summer heat wave and a prolonged garbage strike, which just exacerbates Edison’s plight to no end as he and his wife Edna deal with noisy neighbors, loud sounds emanating from Manhattan streets up to their apartment and even a burglary of their apartment during broad daylight. Mel eventually suffers a nervous breakdown from the whole affair, and it is up to the loving care of his brother Harry, his sisters and Edna to bring Mel back to a firm reality.

A comedy in true Neil Simon tradition presented in a close-up and personal setting.

Tickets only $20. To order tickets: https://www.canadahelps.org/en/charities/help-fill-a-dream-foundation/events/prisoner_of_second_avenue/