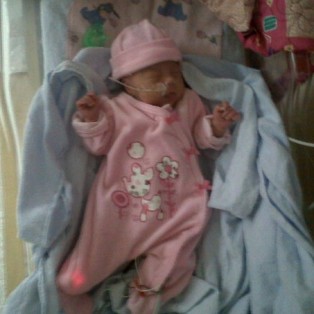 Acid reflux is a condition that can cause persistent irritation and pain in adults and, if untreated can lead to cancer of the esophagus. For a three and a half pound prematurely born baby, the affects are much more severe and almost always fatal. For Andraya it meant that she could not keep any food down. Combined with a floppy airway, this led to choking and difficulty breathing.

This is what Andraya’s young parents were faced with in the days after her birth last November. As her mother Alicia said, “We were completely overwhelmed by her condition and stressed out by having to deal with changing formulas and medications trying to find a solution to the problem.” The correct formula and medication were found but then another problem presented itself: the cost.

Andraya’s parents struggled with the costs of formula at $50 a week and medication at $100 a month while visiting their daughter daily during her seven-week stay after being delivered at Victoria General Hospital. “We were dipping into our rent money to cover the expenses and didn’t know how we would be able to continue,” said Alicia. While financial help was available from the Provincial government it required a trip to Vancouver to register, a difficult and expensive journey for two working parents with a two-year old son to look after as well.

The solution eventually came through a sympathetic doctor and a helpful social worker who referred them to Help Fill A Dream. The HFAD staff set up a payment schedule so that they could drop by the office on a regular basis and collect a cheque to cover the cost of the formula and medication.

With the financial stress removed Andraya’s parents were able to focus on getting their lives back in order and helping their daughter get better. After her lengthy initial hospital stay, Andraya had to be taken back on numerous occasions because of complications such as gastric flu. Because she was so small blood samples and intravenous feedings had to be done through a vein on her head.

According to Alicia, Andraya has been a trooper through all of this, smiling and charming everyone she has dealt with. Although she is still susceptible to the flu and recently had strep throat, she has made great strides and now weighs in at a solid 23 pounds. As she approaches her first birthday her future is looking brighter and she is now going to a play group on a regular basis. Although there are no immediate cures, her acid reflux and floppy airway are expected to resolve themselves as she grows older.

“I don’t know how our family would have gotten through this without the assistance that Help Fill A dream gave us and we’ll always be grateful to them”, said Alicia.