Jonathan’s life has not an been easy one. He was born with a birth defect which left him unable to breathe on his own, unable to eat, deaf, and with severe scoliosis.

He was on oxygen and a feeding pump and also received a cochlear implant at 2 years old to help him hear. He had a swallowing disorder and severe reflux which caused many aspirational and viral pneumonias. And he had surgery to insert an artificial spine called a Vertical Expandable Prosthetic Titanium Rib at 3 years old.

These two growth rods work by being expanded every 4-6 months to allow him to grow, and need to be replaced whenever he outgrows them. Jonathan has endured 40 surgeries which have had many complications such as lengthy hospital stays for infections, broken ribs and a broken rod!

Recently it was discovered that the VEPTR was no longer effective and Jonathan’s breathing was starting to be compromised. While he is young to have permanent rods fused to his spine, he endured a 10-hour surgery to have this procedure and was in the ICU for several days and on life support. As a result of complications he has had another surgery since.

Despite all of this he rarely stops smiling: he is energetic, outgoing and maintains a very optimistic outlook on life. If he looks familiar you might recognise him as Wolverine in the 2019 Junior Superheroes calendar. It was a natural choice as Jonathan has almost as much steel in his body as Wolverine. 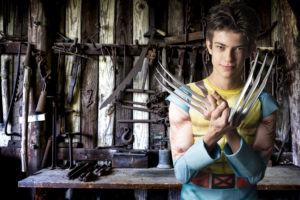 With all of his surgeries behind him, Jonathan wants to be just like a regular kid and do all of the things that most kids take for granted. He loves spending time outdoors with his family and he wants to ride a bike to school, but isn’t strong enough to do that on his own. Jonathan’s Dream was to have an electric bike so that he can ride to school.

Jonathan’s Dream was filled at the 2019 Golf for Kids event with a surprise presentation of an electric bike. Understandably, the crowd went wild! 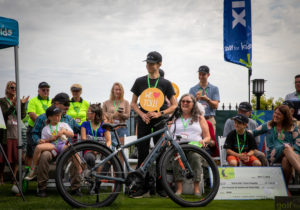 Since he received the bike Jonathan’s parents have been in touch to share an update:

“Thanks again for making Jonathan’s dream come true, he still hasn’t stopped smiling! He now wants to ride to school every day, rain or shine. He no longer has to struggle or walk up the hills he zooms up! Not only is he incredibly happy with the bike, he’s proud and confident in the independence this has given him. His school does a bike ride for physical education and he was so happy to be able to keep up with the other kids. He is still chuckling over how you surprised him, but he does now remember me asking him about his dream. I am sure your aren’t surprised to hear he used the gift card for an orange helmet and has managed to find an orange saddlebag.” 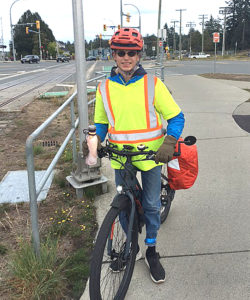 Donate to make the impossible possible for more children