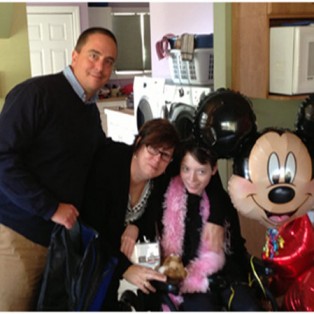 Despite her limitations Katrina is able to relate to other people and experience things going on around her but is limited in her ability to express feelings and thoughts in return.

On first meeting Katrina is somewhat shy but after she becomes comfortable with a new person in the room she settles in to working on her favorite colouring book while casting the occasional furtive glance at the stranger in her living room.

After several tries, HFAD approved a cruise for last October but Katrina came down with septicemia shortly before the departure date and the trip had to be cancelled. Fortunately the money involved was refunded and it was decided that a land based trip might be better. With a November date planned it was also decided that Disneyland in Florida would be a better destination than Disney World in California because of less likely hood of rain.

The trio made it through the trip despite having to change planes, collect luggage and go through US customs in Toronto before continuing on to Orlando.

“The trip was tiring and stressful but once we got to Disneyland we were thrilled with the way the people and the facilities made it possible for Katrina to have such a great time,” Margaret said.

The Disney staff looked after getting medication they needed from an offsite pharmacy and even paid for a taxi to the airport when the wheelchair accessible bus broke down.

Pictures from the trip show Katrina smiling broadly as she meets various Disney characters. She also had the opportunity to go on several rides that Disney has made wheelchair accessible.

“She really loves the tea cup ride and got to go on it several times as the wheelchair section was not being used by anyone else,” said Margaret, “We even went on a small roller coaster, which Katrina loved but my sister din’t appreciate at all.”

Since returning to Victoria Katrina is back attending the Victor School for disabled children where some of her activities include cooking and wheelchair dancing. She also participates in the wheelchair soccer program, “kicks for kids”, at the University of Victoria and goes swimming regularly. Margaret has made their house wheel chair accessible so that Katrina has a comfortable home base.

“We just want to thank Help Fill A Dream for giving us an opportunity to get away for a while to a place where Katrina could smile and have some fun. It’s really made a difference for us,” Margaret said.