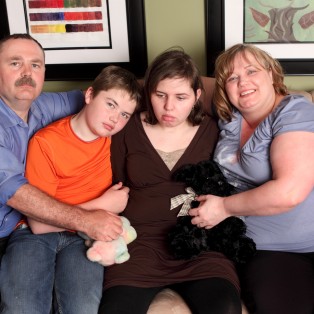 Debbie Cumby suffered a heart attack in 2003, was in a coma for 2 days, survived and then had a pace maker implanted, all before the age of thirty. Six years later during a family reunion in California with her husband Bill, who had been serving in the military in Africa, her teenage daughter’s heart stopped beating while they were riding a roller coaster together.

An undetected genetic disorder had caused Sasha’s cardiac arrest and only her father’s quick action while frantic activity went on to stop the amusement ride saved her life. Despite that and extensive medical care to deal with the brain swelling caused by lack of oxygen, she was left totally disabled and unable to speak.

Many people would have given up after all that but Debbie and Bill carried on, being with her during her treatment in California and then bringing her back to BC for more treatment and rehabilitation. After that was done they make the difficult decision to take care of Sasha in their small, three story Langford townhouse. a decision that was made despite the insistence of at least one Social Worker that she would be better off in an institution.

“I had to throw that woman out of my house,” Debbie said, “Why would she even think that I would turn my daughter over to someone else to look after. No one can take care of her the way her family can.”

After that the family took on the daunting task of turning the garage and basement family room of their home into a virtual hospital suite where Sasha can be safe and comfortable while still being close to the rest of the family such as her brother William who eats breakfast with her every morning before going to school. Their small pet dog also comes down in the morning and begs to be lifted onto the bed to visit with her.

The space has all the necessary aids that would be found in any institution, such as a hospital bed, an overhead lift to facilitate getting her out of the bed and a special chair for her to relax while watching TV. Video cameras are on permanently to allow her to be monitored from the other floors of the house when she is alone and there is a small kitchen where the food that is given to her through a tube in her stomach is prepared. A fully equipped, wheel chair accessible, bathroom is also included in the set up.

With the help of outside care givers and her family Sasha can be taken to other parts of the house and out to a nearby pool where she is able to stand and exercise in the water. She also has a tutor who comes in from one of the local schools to work with her on a regular basis and a family doctor who makes house calls.

As Debbie says, “All of these things have contributed to her making amazing progress, both physically and mentally, but even many seemingly simple medical and dental procedures requires a trip to Vancouver to see specialists.”

Of course, none of what the Cumby family has done or are continuing to do comes cheaply and financial help did not always come easily.

“A number of charities turned down our requests for help because, they claimed, with Bill being in the military we had access to lots of resources,” Debbie says, “I don’t know where they got that idea but it wasn’t until we were connected to groups like Help Fill A Dream and a few others that we began to get the assistance that we really needed, not only for Sasha but for William as well.”

The help for 13 year old William came after finding out the cause of Sasha’s attack they had him tested and found out that he had inherited the same genetic disorder. At first he had to have an external defibrillator but after further testing he had a pacemaker/defibrillator implanted in his body and will have to live with it for the rest of his life.

“Having the external equipment made him very self conscious at school but now he’s much more comfortable,” said Debbie, “Help Fill A Dream also sent all of us back to Newfoundland so that William could fish with his Grandfather and ride a dirt bike, something that really helped him through the whole experience.”

Help Fill A Dream has paid for things such as splints for Sasha’s legs and the video monitoring system that keeps and eye on her. The foundation has also helped with travel and living expenses for Sasha and William’s treatments and tests as well as for family members to visit from Newfoundland.

Debbie and made a difficult decision about how to deal with their daughter’s catastrophic illness and have worked hard to help Sasha progress to where she is today at the age of nineteen. Bill now works for BC Ferries on a week-on, week-off schedule and has put a lot of effort into making their home a safe and comfortable place for all of them. His latest project is involves replacing all of the carpet in their townhouse with wood floors.

“Bill spends as much time as he can with Sasha on during his off time and having her at home makes it possible for him to do that and give the rest of the family the time and attention we need,” Debbie said, “That and seeing the progress that Sasha has made makes all the hard work and the outside help we got worthwhile.”