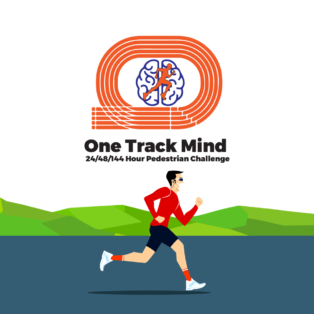 One Track Mind was created by race director Lisa Large to enable Jerry to make his attempt. He needed a venue that would allow the record to be certified by the Association of Canadian Ultrarunners (ACU) as well as two other runners to run the event to make the record official. The venue chosen was the Duncan Sportsplex, with the event starting on November 15th at 9am.

As not every runner is keen to run for 6 days, a 24 hr and 48 hr option was added. Lisa and co-race director, Joshua Heath are committed to fundraising for local charities as part of each event they put on. The natural fit for this race was Help Fill A Dream Foundation. It’s a charity close to Jerry’s heart as he benefited from our programs when he and his siblings were diagnosed with Gardner’s Syndrome, a rare disease with a life expectancy of 35-45 years old. Jerry is now 40 years of age and has an incredible gift for endurance. This race and record will remain as an inspiration and part of his legacy to his children and those who live with rare diseases.

Like many charitable organizations, Help Fill A Dream Foundation has been hit hard this year with their major fundraising events cancelled due to Covid 19. This event aimed to boost our fundraising and directly help Vancouver Island kids living with life threatening conditions.

It was a week of fairly miserable weather as runners ran (and ran, and ran) laps around the track in Duncan. There was a phenomenal support crew keeping them paced, hydrated and fed and of course recording all those crosses of the finish line. New records were set including Viktoria Brown logging 324.864km over 48hr in relentless rain. A Canadian record broken on Canadian Soil. Jerry ran for 6 days straight, he might not have broken the 870km record but he did an absolutely incredible job and showed us all how he will never give up.

To Jerry and all the other runners, and those who supported them – Thank You from the bottom of our hearts, you are a constant inspiration for us all, and especially for our kids who see a real story of hope in Jerry.

For all the inside stories see the One Track Mind Facebook page.