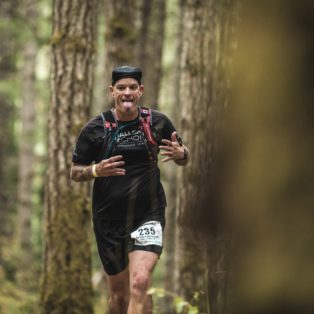 We were delighted when our friend Donald Peterson told us last year that he was going to raise some money for us in 2019. We were surprised (intrigued/impressed) when we learned how he was planning to do it! Turning 50 is a significant milestone. Many people choose to celebrate with a meal out, a party or even a trip somewhere special. Donald decided to celebrate his fiftieth year with something a little more, well, … out there!

Channelling a love of adventure, the outdoors and running, Donald set himself a challenge for this significant birthday year, a minimum of twelve 50 km events — one a month for 2019. Undertaken as  a personal challenge rather than an organised event, but Donald wanted to make sure it was for a reason other than “just to say I did it.” To that end, Donald leveraged the difficulty of his challenge to bring awareness to the work that Help Fill A Dream does, raising funds along the way.

Now, at the end of 2019, and with twelve 50km runs under his belt, we caught up with Donald to find out how the challenge came about and how he fared.

At the start of the year Donald had a range of events in his sights, some on road and some on extremely rugged trails. He wasn’t sure which would be harder: 50 km ‘around the block’ in Victoria (laps of the city block that contains MEC, where Donald has worked for many years) or a 50km ‘Run to the Top’, the top of the Golden Hinde that is, the highest peak on Vancouver Island.

As an accomplished ultra-endurance athlete Donald has previously run across deserts and through the jungle, as well as participated in races all over North America. He intended this challenge to be closer to home, with the runs all taking place on Vancouver Island, for the reason that Help Fill A Dream specifically helps children on Vancouver Island and the Gulf Islands when they have been diagnosed with a life changing illness or medical condition. Donald witnessed the effect that one Dream had: it was as simple as providing a bicycle and safety equipment to a child recovering from a serious illness. The child’s delighted reaction has stayed with Donald: a reminder of the value of the dollars he’s worked hard to raise.

December 14th was the last event of the DEEP 50 challenge and the total Donald has raised stands at nearly $5,000! “I’m pretty stoked to have completed the DEEP 50 project and to have raised as much as it has for HFAD.” Donald admits that the year felt like a bit of a grind, “I believe the rule of thumb for recovery is one week per 10km run so I’ve been running myself into fatigue debt all year long and I really felt it on the last 50. I started it tired and finished it much more tired.” He faced challenges in addition to grinding out the miles, “I pulled my right calf during the October 50 around the 40km mark so had to nurse it in for the last 10km and then during the November 50 I tripped on a root or rock and took a pretty decent fall, bruising or cracking a couple of ribs in the process, it made the last 24/25km of that run a little challenging.”

Despite the challenges Donald kept going, in part due to an amazing support network. He would like to thank friends from the ‘Conquerors Of The Useless’ crew who “joined in or supported on almost every run, fellas like Bone, Carter, Fancy Geoff, Handsome, OTC and Turbo plus I had the ‘Gumdrop’ crew from Mountain Equipment Co-op come support me on a number of the runs as well. The support I’ve had has been amazing!”

As to what’s next, Donald says: “It’s time for a little rest 🙂 I will relax, eat and drink too much, enjoy the Holiday Season, say goodbye to 2019 and fully embrace a fresh start in 2020. There are a few adventures I’d like to take on in 2020 (run up the Golden Hinde, a multi-day fast pack on the Olympic Range, run the Auger Point Traverse) and I’ve got early planning on the go to get them sorted but it’s too early to commit to any details yet.”

Donald, we can’t tell you how impressed we are with your dedication, and how grateful for the dollars that your challenge has raised. They will go towards making life a little easier, a little more special, and a little more hopeful for a child and their family, facing a challenging future.

The donation page is open until December 31st for anyone else who wishes to make a contribution.